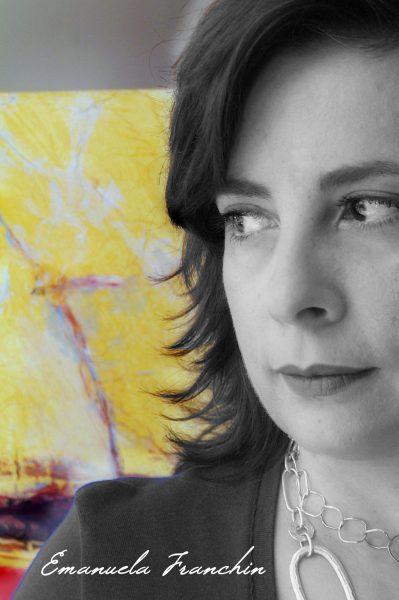 Emanuela Franchin both has her studio and lives in Riviera del Brenta, in the province of
Venice.
She trained at the painting and sculpture courses of Maurizio Piovan and then, in Rome
from 2009 to 2012, she specialised in stratigraphic palette knife technique with the artist
Mario Salvo.
Her artistic career began in 2002 with minimalist figurative works devoted to the world of
nature: large heads of flowers portrayed with a multi-material technique that resulted in
intense and poetic delicacy. In 2004 and 2005 his first solo exhibitions, one of his painting
enters the Public Collection of Cultural Heritage of the Monselice city (Padova).
Her specialisation in palette knife technique opened new horizons to her, from
representations of still-life and landscape, with an expressionist style overflowing with
intense and vital colours, to abstract expressionist painting that the artist experienced with
enthusiasm, spreading out the color, moulding, modelling, by removing and adding, and
incising the material in search of “panoramas of the soul”.
In 2010, on the invitation of Giulia Sillato, she became part of the “Metaformismo”
movement and in the following years she was dotted with many shows in Italy and abroad;
she was selected to be a part of the artists associated with the Milan “Museo La
Permanente” from 2018 onwards.
In 2019 she had the honour of being selected among the top forty artists, and to prepare
two works to represent Italian art in the exhibition “Pace e Amore Italian Selection for Expo
2020 Dubai – Abu Dhabi” official event at the Universal Exhibition to be held in Dubai from
October 2021 to March 2022. The artist was chosen for her unique ability in abstract
expressionist painting to unite technical aspects to a particular sensitivity from a chromatic​
point of view, which permits the communication of themes and states of mind to a public
from all nations.

In 2021 the artist was selected, two paintings entered the Permanent Collection of
Contemporary Art “ARTinGENIO MUSEUM”, inaugurated on 10 June 2021 by Vittorio
Sgarbi, at the prestigious headquarters of the “Officine Garibaldi” in Pisa.
Currently the artist composes her works by choosing almost only square formats, the
symbolic space of her art which is devoted to an informal abstraction where she scans the
soul and recounts emotions, which are amplified through a rich colour range inspired by
the colours and luminosity of precious stones.
Great harmony and a sense of calm pervade all her compositions, from which there
transpire what the artist defines as “emotional vibrations”. At times the paint is tactile and
at others, in sharp contrast, is softened as a result of a “tonal system” that, accepting the
heritage of Venetian painting, reinvents it with the use of stratified fields and veils that,
according to the light, are transformed into infinite tonalities. These forms, visually powerful
and evanescent at the same time, appear in her paintings thanks to a great technical
ability and seem able to modify themselves and then vanish in a moment, like the passing
of existence, like palpitations in silence. A journey that the spectator himself can travel,
through matter and chromatic transparencies, he can enter the canvas, into history,
interpret and reread his own life in the sign of color, until he discovers the codes of the
soul.
All this is confirmed by galleries and publishing houses that appreciate the originality and
particularity of a painting of extraordinary workmanship and incredible lyrical sensitivity,
born from the artist’s unstoppable desire to express himself.
Her paintings have been widely reproduced and published by, among others, Editoriale
Giorgio Mondadori, Catalogo Mazzotta, 24 ORE Cultura, and l’Editoriale De Agostini.​
The numerous invitations to the most important international events, such as universal
exhibitions, the institutional locations that make theater to her research, confirm in her one
of the most prestigious and poetic realities of a way to making art that combines soul and
color in a universal language, always looking for the light and the next emotion.

€2.700
Other works from Emanuela Franchin