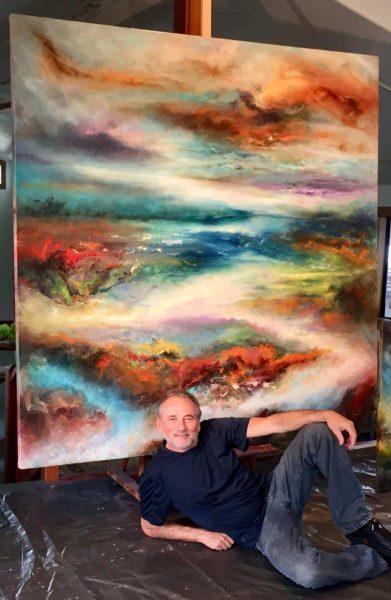 BIO Dario Campanile’s journey started in Rome, Italy where he was born April 21, 1948. Dario expressed an affinity for art as a young boy. When he was 14, the artist was bedridden with a kidney ailment for three months, and his father gave him a set of oil paints to cheer him up. He painted his first still life in just a few days. A self-taught artist, once Campanile had mastered the tools, he was off on a free-spirited ride, never quite sure where he was going, but always secure in the knowledge that his natural gifts and instincts would take him into exciting new realms. Meetings with Salvador Dali, who coined him the “Roman Master” and De Chirico influenced his work as a painter. In 1986 Dario was commissioned to redesign and create a new logo for the famed Paramount Pictures. In 2005 Dario was invited to participate on a project called “Missing Peace”. Dario met the Dali Lama at his home in India where he posed for a portrait exhibited in the project.
After decades of painting realism and surrealism, Campanile’s work has evolved into abstract expressionism, which is now the artist’s main focus and passion. Here, he describes what it is like to create his renowned abstract paintings:

The Light Of Being

Under The Olive Tree

Other works from Dario Campanile

The Light Of Being

Under The Olive Tree