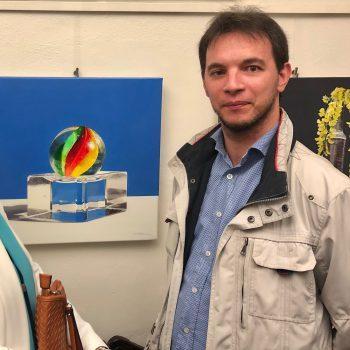 My name is Paolo Tagliaferro, I was born on 25 September 1981 in Lonigo, in the province of Vicenza. From an early age I immediately became passionate about drawing and painting, also thanks to the teachings of my father, who has always had a passion for art, and I began my artistic journey by making copies, mainly by Caravaggio but also by other painters. of the seventeenth century. I attended the “A. Martini "in Vicenza, and then graduated in painting at the Academy of Fine Arts" G.B. Cignaroli "in Verona, in 2007. While studying at the academy, I approached hyperrealism
Show More
pictorial movement born in the United States in the 1970s). The first experiments concerned the genre of still life, and then expanded to portraits, portraits of animals, also proposing still lifes with ancient and modern toys. After the beginnings, with the participation in painting competitions and exhibitions in the Vicenza area, thanks also to the appreciation of critics and gallery owners, I came to exhibit at the 54th edition of the Venice Biennale in the winter between 2011 and 2012, organized by Vittorio Sgarbi in the various locations of the Italian capitals. Among the most important art events in which I participated from 2009 onwards I list them in summary: "Contemplations, beauty and tradition of the new in contemporary Italian painting", Rimini, Castel Sismondo, July - August 2009 "Inside". important collective exhibition of Italian hyperrealist painters, San Gimignano, September - October 2009 "54th edition of the Venice Biennale, Art is not our thing." Sala Nervi, Turin, December 2011 - January 2012 “International Grand Tour of Art in Russia”, August - October 2015 “Sorrento Young international festival”, Villa Fiorentino, Sorrento, April - May 2018 "Masters of Italian hyperrealism, No Pixel - Art to the limit", Bellini Art Gallery, Sarnico (Bergamo), April - June 2019 Among the most important collaborations I had was the one with a film company in Rome in 2011 that asked me to create the painting for the film "the restless stars" which became the poster for the film. To know my complete curriculum, exhibitions, art fairs, awards and recognitions, collaborations, interviews and reviews, and my artistic production, this is my website: https://www.artpaolotagliaferro.it/ Since 2013 I have enriched my artistic and cultural experience with the teaching of hyperrealist painting at various Italian art workshops and in the city of Rome since the beginning of 2018 following mine during the rather intense experience in teaching classical painting technique and hyperrealist, I decided to try to write a book, the "practical manual on hyperrealist painting" on still life, updating it continuously, and distributing it to my students who wish to deepen the pictorial technique and from 2021 it is distributed through a national publishing house. Recently after years of painting practice I have had a small change in my production. Thinking a lot during 2020 I have come to develop a blend of reality and surrealism in my paintings while staying in my hyper-realistic way of painting to create something that exists and does not exist, and working on this inspiration, I would like to deepen this model of representation in my paintings. , especially in the theme of toys and still lifes. The artist is featured in numerous catalogs of contemporary art exhibitions.