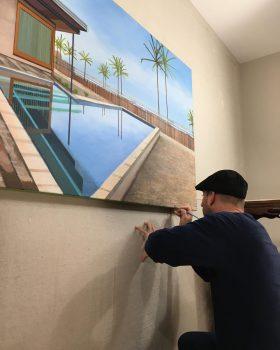 Timothy David Lang was born in Morristown, New Jersey April 18, 1979. He attended Morristown High School and during these years he began to gain interest in fine art. This small foundation soon led to a greater interest in graffiti during teenage years. Following high school he continued his education at Salisbury University on the eastern shore of Maryland. He began his first semester as a business major but quickly switched after his first year. He chose to major in fine art with a concentration in painting and drawing. After graduating with a BFA from Salisbury University in 2001, he moved
Show More
Hawaii to live with his brother for a short period before relocating to North Carolina. Timothy lived, worked, and produced in Wilmington, North Carolina for six years. In 2010 Timothy moved back to New Jersey. Timothy has been exhibiting his work for seventeen years including eight Solo Exhibitions and eleven Group Exhibitions. While in New Jersey, his exhibitions included six solo shows and three group shows. In 2017, Timothy moved back to Wilmington, NC where he currently lives and works.